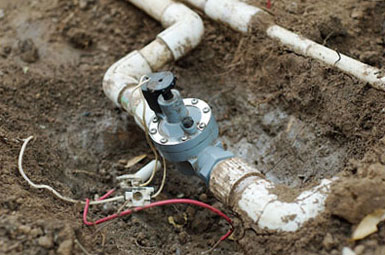 Manual, electric, hydraulic and remote.
Most valves can be repaired rather than replaced. If the valve is a good quality valve we can repair it most of the time. If the valve is staying on when it shouldn’t, often it just needs to be cleaned out. Replacing a valve costs around $150.00 with labor and parts.

Rainbird, Toro, Hunter, Orbit, Champion, Imperial, Buckner, Moody, K-rain, Lawn Genie, Hardie, Irri-Troll, Water Master, Weather Matic, Valve in the head, Impact, Rotor, Spray, Stationary and pop up.
When replacing a sprinkler head pay attention to what you have and try to match the performance and pattern. Sprinkler heads are designed to put out a predetermined amount of water in a specific pattern. Using the wrong head or nozzle can cause brown spots, dead areas or soggy grass if the wrong head and nozzle are used.

We can repair, program, install or replace mechanical, computer, hydraulic, specialists in smart timers, two wire decoder systems, wireless weather stations and remote timers. Timers have evolved just like everything else. We still repair the mechanical timers when we can, but it is getting difficult to get parts for them. Lawn sprinkler timers are going to be replaced with the more efficient and versatile user-friendly computers sooner than later. Hydraulic timers are rare but still out there. As these fail you need to consider converting over to the standard 24-volt system. Remember, the less expensive the timer the more difficult it is to learn, program and remember. A good timer should be easy to set up and use. We are trying to get you a video of every timer and how to program or set it. If we don’t have yours up yet call us and we will. Adjust your timer often for the season or consider a “smart” timer.

PVC plastic, galvanized, copper, poly, Rainjet.
PVC pipe comes in an assortment of qualities and thickness. The Schedule 40 is the most commonly used in colder climates like Salt Lake City. It is stronger and if bumped during very cold temperatures it is less likely to get damaged. A common and less expensive PVC pipe is the class 200. It meets the standard for pressure is thinner in the smaller sized pipes allow more water flow (less friction) but is very fragile in freezing weather.

The galvanized pipe does well in some soils, but not in clay-based soils common in the Utah area. In some parts of the Salt Lake Valley it will last less than 2 years, other parts of the valley 30 to 50 years. It is more labor intensive and has faded in popularity over the last 30 years, but is still a good option in some circumstances.

Copper pipe is a great product but currently very expensive. It is also a highly sought product for theft because of its recycle value. Poly pipe is usually a black rubber looking flexible pipe. It is cheaper to install and can be installed using a vibrating plow making labor much less expensive. It does, however, become brittle after a few years.

Poly pipe requires the correct fittings most commonly a gray barbed with hose clamps. It is great for cold weather because it expands, valves and heads don’t expand much and the system still needs to be winterized properly.

RainJet pipe was extremely popular in the 1970’s and early 1980’s. There is a lot of RainJet pipe still in use today. RainJet fittings, pipe and heads are no longer available but there are a few products that will allow you to convert the 7/8” (very odd size) pipe to poly pipe then to PVC or galvanized. 40 years was a good run.

We can fix any of your wiring problems. Including damaged, missing and install. Wire comes in all sorts of sizes, qualities, and lengths. The correct wire for most applications can be meet using the multi-strand UL approved for direct bury color-coded wire available everywhere. Be careful not to purchase thermostat wire commonly sold by do-it-yourself places as a cheaper alternative because the insulation decays in the soil. Use a waterproof connector (wire nut designed to keep moisture out) to splice the wire or connect the valves. The wire ran over 500’ should be a heavier gauge to carry the voltage properly.

We offer several brands right on our trucks. The electrical part of a valve which is controlled by the timer and directs the valve to turn on is called a solenoid. It has two wires, one attached to the common and the other to a zone wire. For instance, the brown wire is connected to zone 1 at the timer and is connected to the # 1 valve and the white wire connects to the common at the timer along with all other valves in the circuit. It is almost always a 24-volt system. I have run across a few 120 volt systems over the last 34 years but most all have been standardized to 24 volts. The solenoid works when the timer sends current to pull up the plunger changing the water pressure in the valve allowing the diaphragm to open. Remote 9 volt battery operated timers require a special latching solenoid that looks similar but will not interchange with one another.

We stock most types of fuses for sprinkler system timers. Most modern timers use a 250 volt 1 ½ amp fuse. They appear to be the same as an old-style car fuse, but do not put in a larger amp fuse; it will destroy your timer.

This one hurts the most! It can be avoided if the system was installed and winterized correctly. If you have freeze damage give us a call. We can fix it.

Damage to the pipe, valves, backflow preventer and heads from freeze damage can almost always be avoided by winterizing your sprinkler system properly and timely. The damage to PVC pipe appears to shred the pipe, splitting it over sometimes large areas making any water leak hard to pinpoint, often showing up as a lack of pressure problem. When cutting out freeze damaged pipe it is necessary to go a bit beyond the damaged area to ensure that the hairline crack is completely cut out, otherwise, the pipe will split more after the repair is completed. The damage to the valve is obvious most of the time but can be very subtle showing up as normal wear and tear but reducing the life substantially.

Schedule an appointment online for sprinkler maintenance or repair.